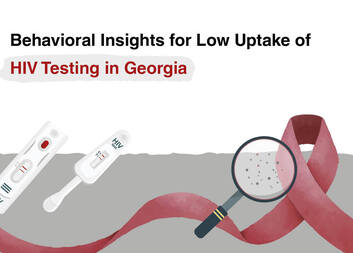 Why Promotion of HIV Self-Testing is so Important in Georgia

Although Georgia remains to be a low  HIV prevalence country with concentrated epidemics in key populations, unless urgent measures are undertaken immediately, the rapid spread of the disease is expected.

Even the prevalence remains low in the general population and there is a decreasing trend of new HIV diagnoses, evidence of high rates of recent HIV transmission in the MSM population and younger people indicates ongoing transmission and risk of potential worsening in Key populations and their sexual partners. Epidemiological data showing an increase in the heterosexual transmission among the male population indicate reflects high stigma and non-willingness to disclose transmission mode. It may also indicate signs of HIV transmission in the general population. The potential for these developments is provided by the MISC 2018 study, which indicates a very low knowledge of the population about HIV, highly prevalent misconceptions about HIV. Despite efforts made to provide improved access to testing, there are more than half of new HIV diagnoses made at the late stage with variation among different districts.

Why AIDS is a more serious disease than HIV? Why timely detection of an infection is so important? How does the disease spread? How many people are infected in Georgia? How long is the life expectancy of an infected person? And why self-testing for HIV/AIDS matter? To find out answers to these questions, Caritas Czech Republic spoke with Giorgi Khechiashvili, an epidemiologist at the Infectious Diseases and AIDS Center and a project expert of Caritas Czech Republic.

Lots of people think that HIV infection is almost the same as AIDS. Can you explain how those two terms differ from each other?

HIV is a virus that attacks the body’s immune system and lives there for a lifetime. AIDS – Acquired Immune Deficiency Syndrome – is the most severe stage of HIV, during which, due to a sharp decline in immunity, we face different types of other diseases.

HIV infection is not a curable infection – it is a chronic and manageable disease. That means that a person who has been diagnosed with HIV should take certain medications throughout their life.

How many people are infected with HIV in Georgia and who is infected more often?

The first case of HIV/AIDS was reported in Georgia in 1989. Currently, our country is considered among the countries with a low prevalence of HIV infection and AIDS.

As of March 23, 2022, a total of 9,268 cases of HIV infection have been registered in Georgia, of which 6,917 are men and 2,351 are women. A total of 1,956 people have died since 1989. Statistically, the highest prevalence of the disease is found in cases of unprotected sexual contact between heterosexuals (approximately 50%), then in drug users (approximately 34%), and about 12-13% of cases are in the so-called MSM population.

At this stage, a total of 5,740 people are involved in medical treatment in Georgia. The rest of the people either refused the treatment or left the country.

What are the ways of transmitting HIV infection?

There are three ways of transmitting HIV: 1. By untested blood or by using an unsterilized instrument that was used for the manipulations of the blood of an infected person. 2. During unprotected sexual contact. 3. From mother to child, both during pregnancy and childbirth and while lactation. There is no other way to transmit HIV!

It is noteworthy that HIV infection stays an asymptomatic infection for a long time, and if a person is not examined on time, he/she will not be bothered by any symptoms for years. Nevertheless, this person will be a carrier of the virus and contagious through the aforementioned ways.

Who and when should be tested for HIV infection?

According to Georgian legislation, testing for HIV infection is not mandatory except for one particular case – if the person is planning to donate blood or an organ to someone else.

There are several state programs in the country that includes routine examinations: 1. Testing women during the first trimester of pregnancy. 2. Compulsory testing of blood and organ donors. 3. Testing of high-risk groups.

Testing for HIV infection is very important because the earlier one is diagnosed, the sooner treatment is started and the more effective it is. If a person is involved in treatment as soon as he is infected, the AIDS stage will not be developed. On the contrary, in the case of late diagnostics and delayed treatment, the absence of immunity in a body can cause other serious diseases. And this may end with lethal results!

Why promotion of self-testing for HIV is so important in Georgia?

Self-testing for HIV infection is a novelty in Georgia. Within this current program, which is carried out by the non-governmental sector, including Caritas Czech Republic, the parties involved try to make it as easy as possible for people to decide on HIV testing.

During self-testing, a person takes the test at home, at their discretion, whenever they want and do not face stigmas or any other kinds of barriers and indeed, this is very important!

Testing for HIV should be performed after the so-called "window period" (risk period) from a risk behavior to obtain reliable results. Regarding the mentioned, each type of test needs an individual approach and a patient should seek medical advice to find a relevant one. It is also important to provide a person with the correct information on how to “read” the test results properly.

The more people are tested, the more are diagnosed with HIV or AIDS. Therefore, infected people start timely treatment and the risk of transmission of the infection is reduced.

Significance of the Project Carried out with Caritas Czech Republic Involvement

Caritas Czech Republic is implementing activities within a larger project to increase and intensify the acceptance of HIV testing among a key population in Georgia. The initiative Behavioral Insights for Low Uptake of HIV Testing in Georgia is funded by the United Nations Development Programme (UNDP) and supported by the Ministry of Foreign Affairs of the Czech Republic.

Behaviorally informed message-box was developed and tested for effectiveness in motivating people to conduct HIV self-testing. Based on the research results, most effective communication messages are selected for developing further campaign and presented to the National Center for Disease Control and Public Health (NCDC), the Center for Infectious Diseases and AIDS, and HIV researchers. Last, but not least, the initiative also works to train selected medical staff to provide young people with confidential and trusted medical advice, without any stigma.

This material was prepared in the scope of the project financed within the Official Development Assistance of the Czech Republic and implemented through the partnership between Czech Development Agency and Caritas Czech Republic.

Did you enjoy reading this interview? Read more: