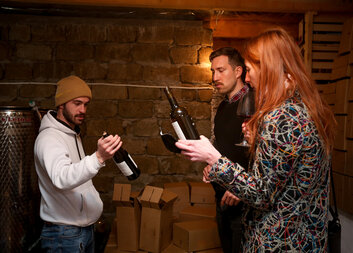 Georgia is the homeland of wine. That is proved by the 7 000-years-old signs of winemaking found by archeologists and Georgians spirit for viticulture. More than 500 varieties of vines are grown in this small country of Caucasus, including Alexandrouli and Mujuretuli – the species from which 24-year-old Akaki Siradze produces one of the most famous Georgian wines named Khvanchkara. In order to support a young winemaker's business sustainability as well as its expansion during the pandemic, with the funding from SlovakAid, Caritas Czech Republic delivered three stainless steel cisterns to Akaki's unique winecellar.

How Akaki Became a Winemaker

The history of Akaki’s business begins with a traditional Georgian family. His ancestors always tried to expand the vineyards to be able to grow and sell more grapes. From his childhood, Akaki wanted to follow in his father's footsteps, and the idea of ​​creating his own winery was constantly on his mind. Thus, after graduating from the faculty of international relations, he changed the field and chose a master's program at the faculty of winemaking and viticulture.

Akaki made his first attempts in wine production in 2019. Initially, he bottled about 200 bottles of wine, which he sold on the Georgian market in just two months. In 2020, he started the construction of a new cellar. Currently, Akaki represents his wine with two brands – Ambra and Qve Sheni Chirime. This wine is sold in prestigious local wine bars and shops, as well as exported to European and Asian markets. 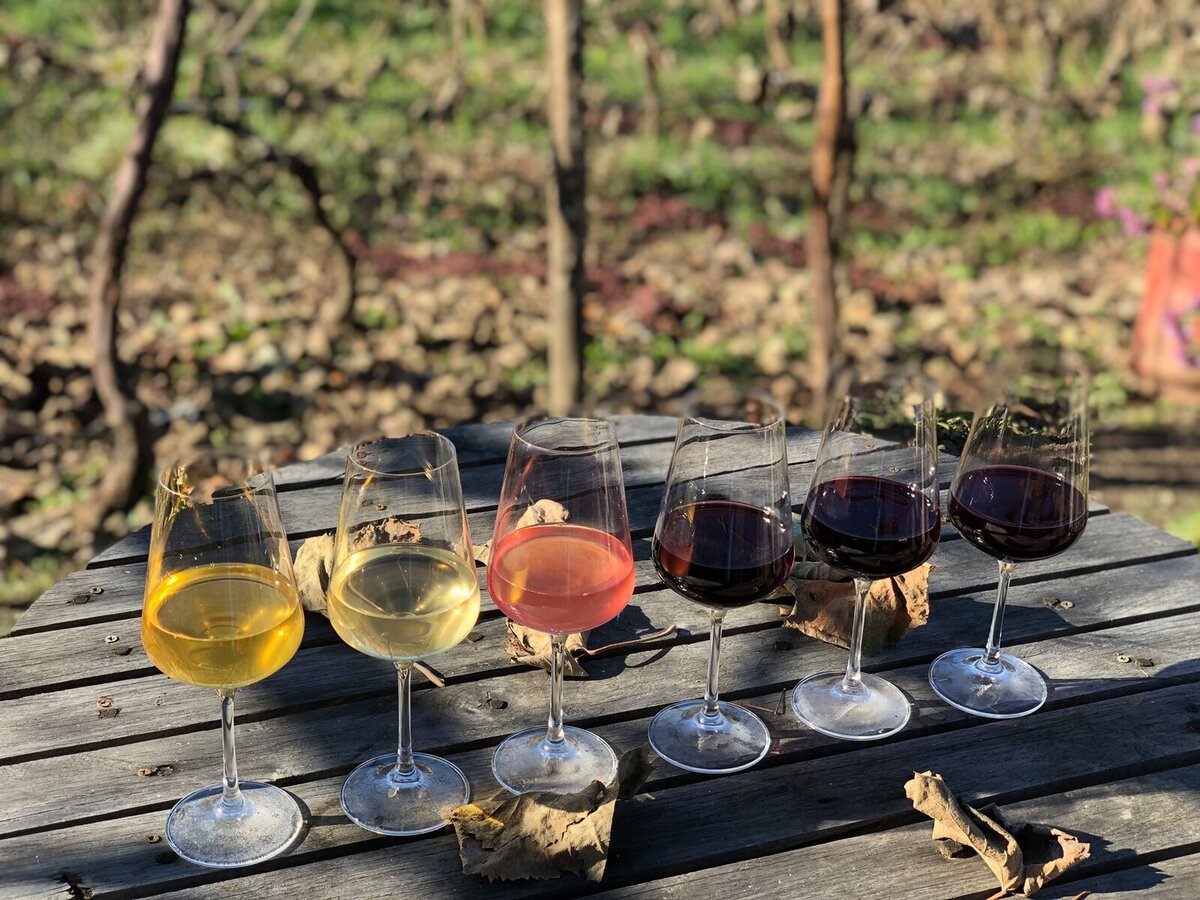 "In 2020, we produced up to 3 500-4 000 bottles of wine and sold them out both on the Georgian and European markets. We store the wine in the Netherlands and from there distribute it to various European countries upon request, including Germany, Italy, and the Netherlands itself,” says Akaki Siradze, a winemaker from the village of Bugeuli in the region of Racha.

"Akaki is an entrepreneur interested in the restoration of those Rachian traditional varieties that are seriously at risk of extinction. He is also eager to fully transit to organic farming. Considering this together with his valuable experience in business-making convinced us to support his wine cellar thanks to the financial support from the SlovakAid," – says Ekaterine Meskhrikadze, Deputy Head of Mission of Caritas Czech Republic in Georgia and a project manager.

Thanks to the mentioned funding, Caritas Czech Republic provided Akaki’s cellar with three pieces of stainless-steel tanks, which helped him to overcome the severe period caused by the reduction in wine sales due to the pandemic. This contribution also assisted him in participating in the Rtveli (vintaging in Georgian) 2020 without delay and increasing wine production. Importantly, in this short period, Akaki managed to arrange a tasting area as well and his cellar became one of the most important places to visit in Racha.

Akaki Siradze produces a natural product – his vineyard is treated only with bio-preparations, and the finished wine is an organically pure product. Notably, famous Georgian winemakers soon noticed the taste and quality of Akaki's wines, as a result of which Ambra and Qve Sheni Chirime appeared in popular wine bars, shops, and restaurants in the capital of Georgia.

Irakli Chkhaidze, one of the founders of the famous Georgian wine bar – 8 000 Vintages, tasted Akaki’s wine at a wine exhibition and was delighted with the young winemaker's product. Irakli recommended this wine to his sommeliers, who then selected Akaki’s wine and placed it on the shelves of 8 000 Vintages. 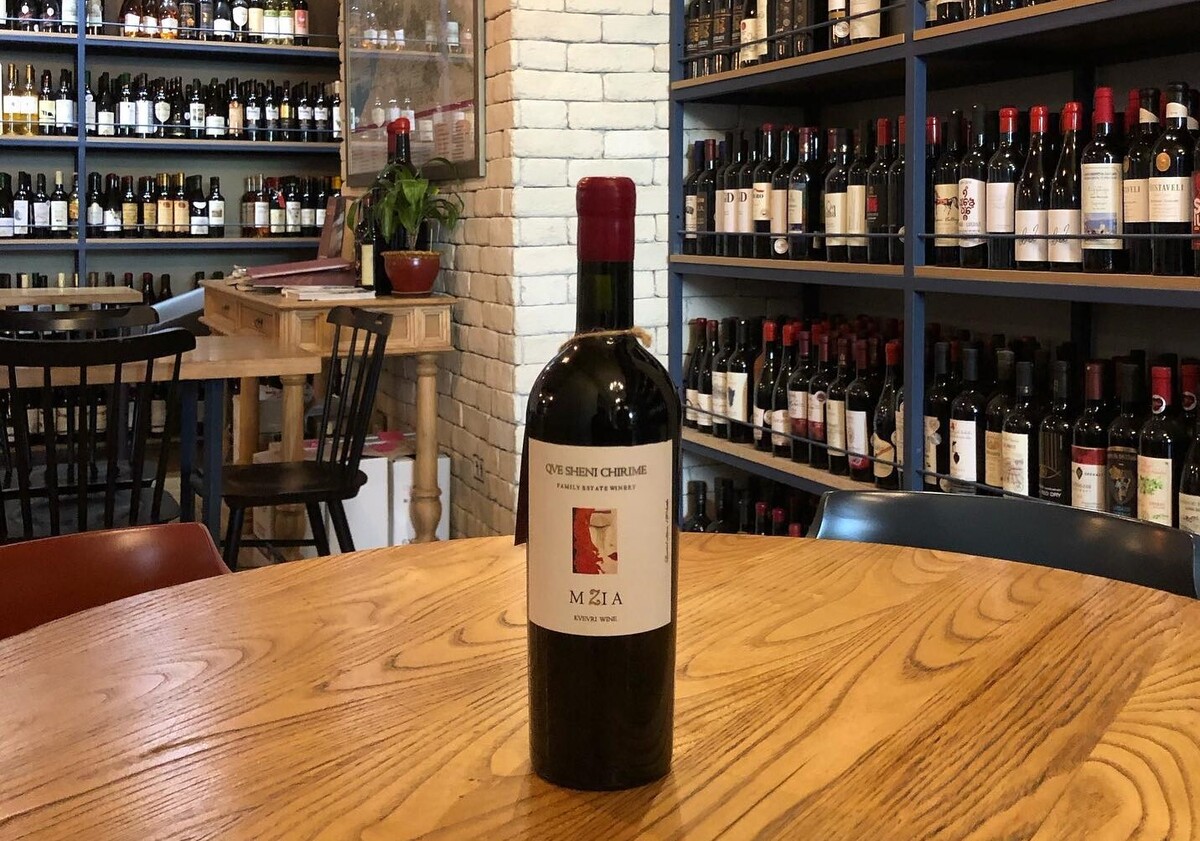 The fact that such a young man presents the region of Racha so impressively is very much appreciated. Akaki mixes rare varieties of vine. His wines have a light body, velvety structure and introduce the region of Racha from a completely different angle. I would like to pay special attention to the endemic varieties of vine – if you taste Akaki’s Khvanchkara, you can feel the influence of the place and the soil,” mentions Kosta Chanturia, sommelier of 8 000 Vintages.

After the success on the Georgian market, Japanese wine lovers and businessmen were also interested in Akaki’s product and visited his village to find out more about his production. They were particularly interested in the production technology, how the vineyards were treated and the process of winemaking itself. This is how they decided to sell Qve Sheni Chirime on the Japanese wine market.

One of the most successful products from Akaki’s cellar is Mzia, which is produced with special branding, great love, and respect. Mzia is a brand that is already well known in Japan:

“Mzia was my mother's name, she died a few years ago. Mzia planted the vineyard from which we now get this grape. I really wanted to do something that I would dedicate to my mother, and at the same time, her contribution would be reflected in all this as well.”

Akaki is going to open a restaurant on the newly built cellar terrace in his village. In the future, he wants to build several cottages on the territories of his vineyards, so that the visitors who comes to taste Ambra and Qve Sheni Chirime will be able to stay on the spot and have a pleasant time: 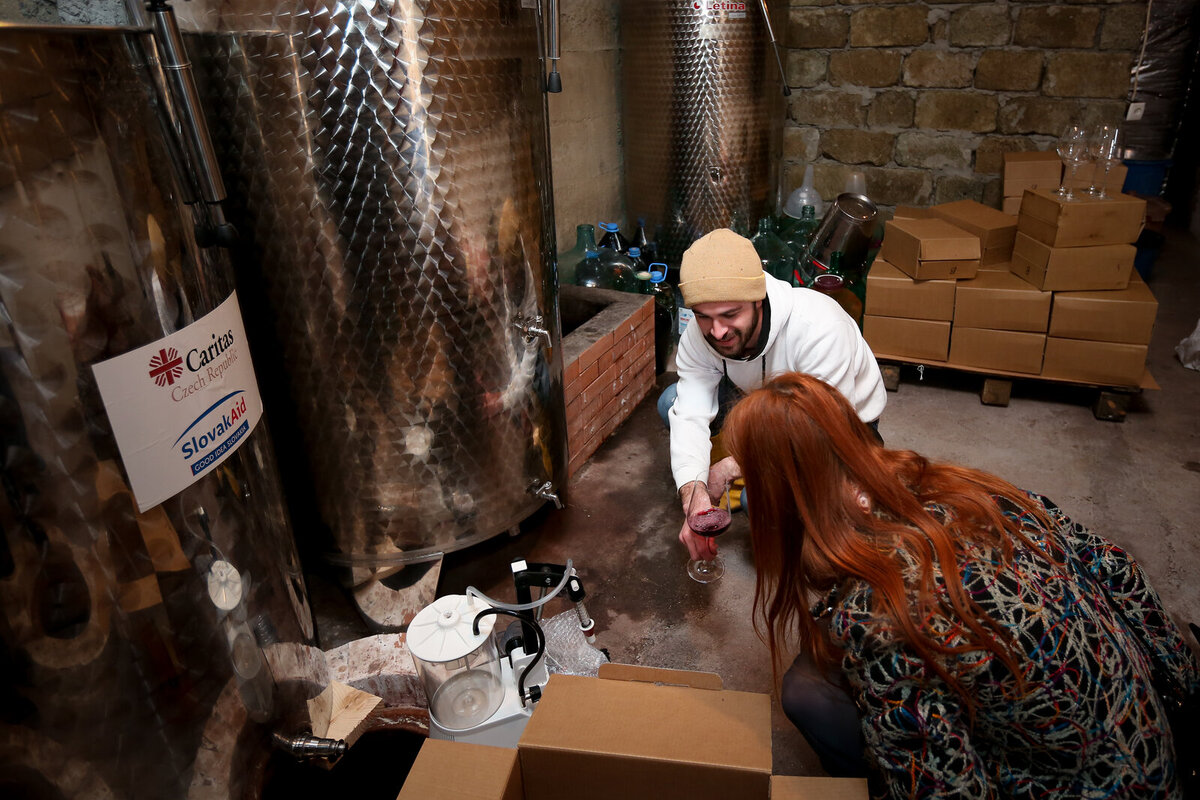 Caritas Czech Republic’s Role in Fighting with the Pandemic

Since the outbreak of the pandemic in 2020, Caritas Czech Republic rapidly tailored most of its activities to cope with the economic and social problems caused by the spread of COVID-19. With the financial support from the Slovak Development Agency (SlovakAid), Caritas Czech Republic’s mission in Georgia in close cooperation with the Slovak NGO Sosna, implemented the project Mitigating the Negative Economic Impact of the COVID-19 on the Population of Racha in the Georgia’s mountainous region of Racha.

As part of the project, CCR supported 26 SMEs to maintain, revive, and diversify their economic activities; contributed to retaining 40 jobs; trained 40 SMEs representatives in online marketing; distributed 3 040 poultries with their vet preparation and food to 152 vulnerable families. Akaki´s winemaking business was one of the supported enterprises.