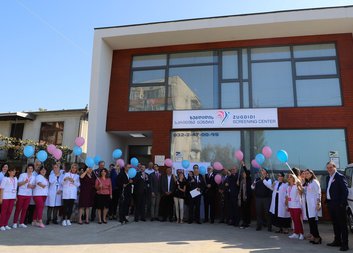 At the opening event, the Caritas Czech Republic in Georgia officially handed over the Zugdidi Cancer Screening Center to local non-governmental organization Cancer Prevention Center (CPC) for management. Project Donor CzDA and the NCDC signed a bi-lateral Memorandum of Understanding as an expression of the further commitment to and support of the implementation of National Cancer Screening Programs in the region. With this action the parties join the campaign “Pink October” to raise awareness about the breast cancer, marked internationally since 1997.

The Screening Center was constructed and equipped by Caritas Czech Republic (CCR) with the financial support of the Czech Development Agency (CzDA) in the frame of the project “Establishment and Promotion of Cancer Screening Center in Zugdidi”. Center is equipped with up-to date office and medical devices, including a digital mammography machine. The project aims at enhancing the accessibility to National Cancer Screening Programs (Breast, Cervical and Colorectal Cancer screening programs, Prostate Cancer management program) in the Samegrelo-Upper Svaneti region, as well as for the population of Abkhazia given the proximity of the border, to ensure timely detection of oncological diseases. The Center will start receiving patients from November. CCR further supporting the Zugdidi Screening Center through consultations and methodological assistance together with partner organization “Tanadgoma”. The campaign aims at educating the population as well as healthcare professionals about the importance of cancer prevention and early detection and engagement of the population in cancer screening programs.